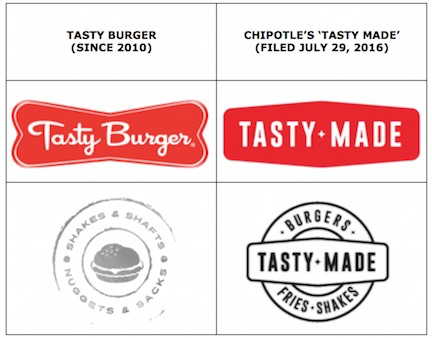 Takeaway: Chipotle received a cease-and-desist letter in July regarding their trademark “Tasty Made” for their new venture, a burger chain with sustainable ingredients and beef raised free form hormones and antibiotics, and the burger battle is on!

An East Coast burger chain that opened in 2010, serving as the official burger of the Boston Red Socks, filed a trademark application in 2010 for “Tasty Burger” inside a styled banner. The trademark is currently on the Supplemental Register and is allowed be filed to the Principal Register once the company gains enough distinctiveness, which Tasty Burger CEO David DuBois claims it has achieved.

Chipotle argues that the Tasty Burger trademark is “merely descriptive and not enforceable” and would not be able to get registered on the Principal Register and is confident in moving forward with the name Tasty Made for its new burger chain.

A Chipotle spokesperson stated that they believed there was enough difference in the name and logo marks so as to not cause consumer confusion, and therefore both brands should be able to co-exist.

Comparing the legal battle between Tasty Burger and Chipotle to a “David and Goliath scenario,” DuBois says that his company “cannot simply stand by and watch an enormously powerful company like Chipotle move forward with opening a burger restaurant with a similar name, mark, and logo design.”

Interestingly, Chipotle originally was going with “Better Burger” but abandoned that mark because the company was challenged with  other trademark issues. Accordingly, Chipotle’s legal team must have more confidence pursuing this mark.

Takeaway: Google is fighting European Union (EU) antitrust probes regarding search, phone software, and advertising.  If the recent proposals become law, Google will have a weaker standpoint when dealing with copyright holders. 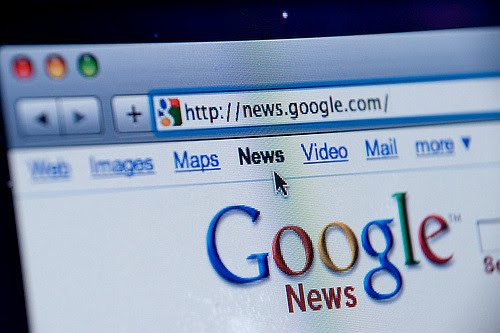 EU regulators are trying to find ways to better protect publishers and creators on the Internet such that if the proposals become law, effectively, there would be “a new right for press publishers aiming at facilitating online licensing of their publications, the recoupment of their investment and the enforcement of their rights” as stated by the European Commission.

For years, European publishers and well as music and video copyright owners have been battling Google as consumers are becoming more and more dependent on the Internet as a source for news and entertainment.  Copyright owners are complaining that Google is essentially free-riding on the profits from the advertising shown next to most copyrighted content.  Currently Google does not show ads for Google News, but according to the draft rules, newspapers may be allowed to demand payment when services such as Google News run their articles, for as long as 20 years after publication.

Google argues that “[t]his would effectively turn the Internet into a place where everything uploaded to the web must be cleared by lawyers before it can find an audience.”

The draft will need the approval of the governments and EU parliament before taking effect, although judges have already voiced their approval and support for the increased rights to publishers. 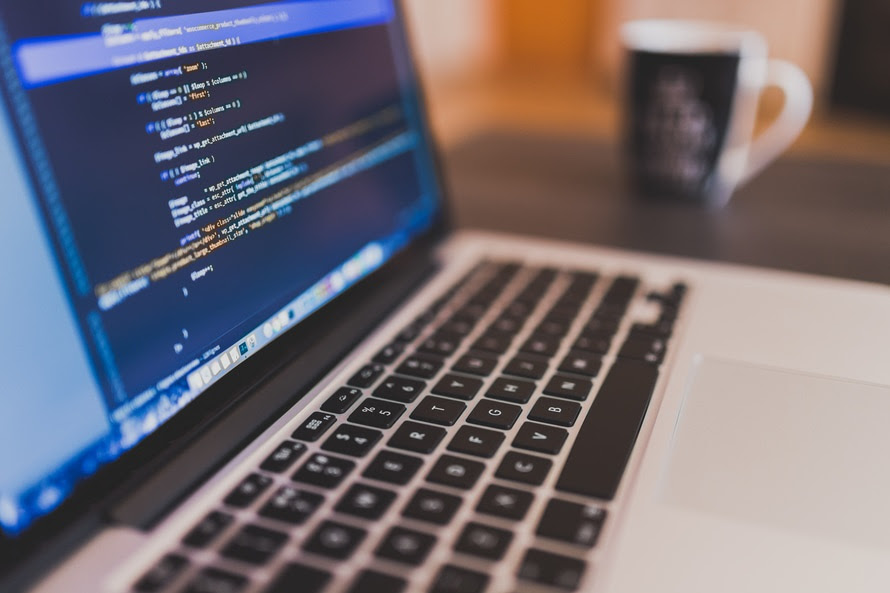 In McRO, the Federal Circuit reached its holding without even reaching step two of the two-part Alice test, which says (1) “determine whether the claims at issue are directed to one of those patent-ineligible concepts”; and (2) “search for the ‘inventive concept’ —i.e., “an element or combination of elements that is “sufficient to ensure that the patent in practice amounts to significantly more than a patent upon the [ineligible concept] itself.”

After a detailed analysis in step one of the Alice test, the Court held “that the ordered combination of claimed steps, using unconventional rules that relate sub-sequences of phonemes, timings, and morph weight sets, is not directed to an abstract idea and is therefore patent-eligible subject matter under § 101.”

For step one of the Alice test, the Court cautioned against oversimplifying the claims.  Claim 1 of the McRO patent recites evaluating sub-sequences, generating transition parameters, and applying transition parameters to create a final morph weight set. The Court performed initial claim construction and determined that the claims “are limited to rules that evaluate subsequences consisting of multiple sequential phonemes,” and the Court later reasoned that “[i]t is the incorporation of these claimed rules, not the use of the computer, that improved the existing technological process.”

The court wrote:  “Here, the structure of the limited rules reflects a specific implementation not demonstrated as that which “any [animator] engaged in the search for [an automation process] would likely have utilized.” By incorporating the specific features of the rules as claim limitations, claim 1 is limited to a specific process for automatically animating characters using particular information and techniques and does not preempt approaches that use rules of a different structure or different techniques. When looked at as a whole, claim 1 is directed to a patentable, technological improvement over the existing, manual 3-D animation techniques. The claim uses the limited rules in a process specifically designed to achieve an improved technological result in conventional industry practice. Claim 1 of the ’576 patent, therefore, is not directed to an abstract idea.” 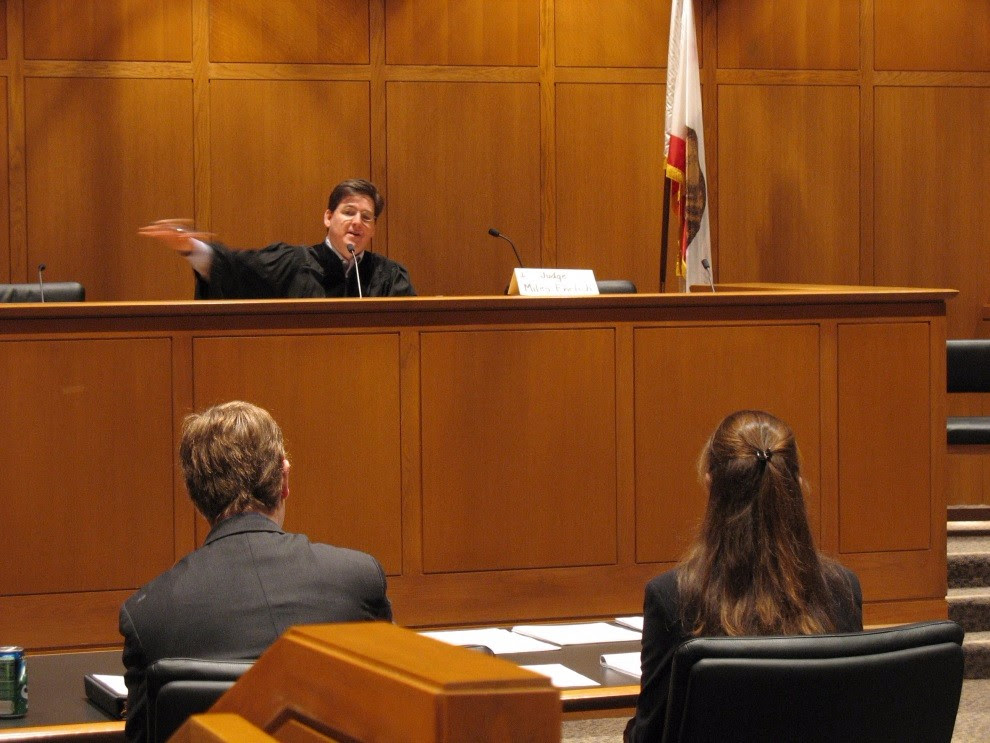 Takeaway: The Federal Judicial Center found that the Central District of California had a higher-than-average numbers of pilot case terminations despite its large caseload, meaning that it is a great forum to file one’s patent infringement case. Further, almost half of cases with an appeal are from one of the three California pilot courts, and one-third of pilot cases with appeals come from these districts

For the majority of 2015’s calendar year, six judges in the Central District of California participated in the Patent Pilot Program, where they were designated to receive patent cases and ended up receiving 186 patent cases, of which 45 were initially assigned to them, 74 cases were transferred to the program from non-participating judges, and 67 cases were transferred to the program as a result of related case transfers or other reasons.

Takeaway: The 2016 Presidential election also will play a huge role in the future of intellectual property and patent law. Clinton introduced several specific proposals directed at patent-related issues, now a part of the Clinton campaign’s larger Initiative on Technology & Innovation, with patent trolls as one particular target of Clinton’s attention. Her proposed reforms include legislation “curb forum shopping and ensure that patent litigants have a nexus to the venue in which they are suing” and requiring specific allegations be made in demand letters and consequently also a higher pleading standard.

Clinton also included in her proposal that the United States Patent and Trademark Office (“USPTO”) should retain all fees it collects from patent applicants in a separate fund, such that any collections above that needed to pay for annual operations would be invested in new technology, personnel, and training. “[Clinton] also believes we should set a standard of faster review of patent applications and clear out the backlog of patent applications.”

Trump has focused his campaign relating to intellectual property law reforms in terms of protecting the U.S. against Chinese-based piracy, as part of Trump’s larger position statement on Reforming the U.S.-China Trade Relationship.  Trump’s position statement says, “China’s government ignores this rampant cybercrime and, in other cases, actively encourages or even sponsors it –without any real consequences. China’s cyber lawlessness threatens our prosperity, privacy and national security. We will enforce stronger protections against Chinese hackers and counterfeit goods and our responses to Chinese theft will be swift, robust, and unequivocal.”

Trump has yet to comment on what his plans would be regarding IP protections in the U.S., but his foreign policy views suggest that he will continue to favor a strong territorial view as opposed to harmonization.

Only time will tell who will be in charge of how IP law reforms will take place, and as with most changes in executive roles, the most impact in the IP realm will occur well after the election, deeper into their office terms. 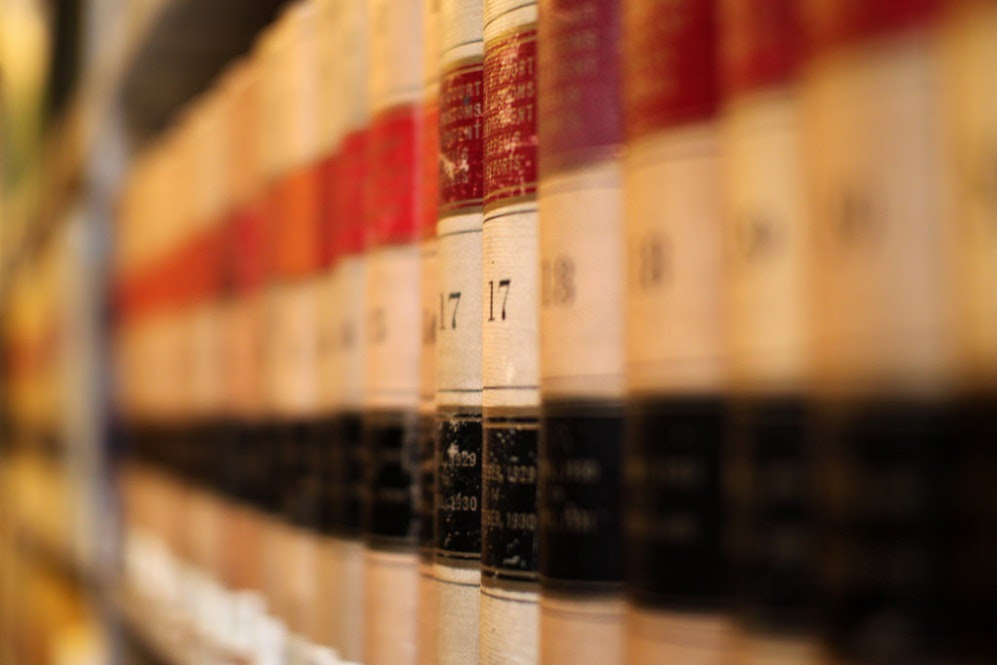 The updated Local Counsel Guide provides lawyers across the country with a how-to manual to best access and litigate cases in the Central District Federal Court of California.

Our firm has helped hundreds of lawyers from across the country navigate their intellectual property litigation here in California. Should any lawyers need assistance with their IP cases in California, they can contact us and use our guide to help litigate their cases.

Please see our Local Counsel Packet which is available on our website, www.cislo.com. 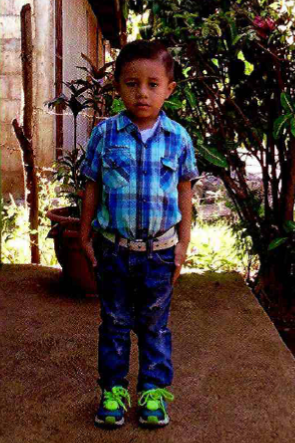 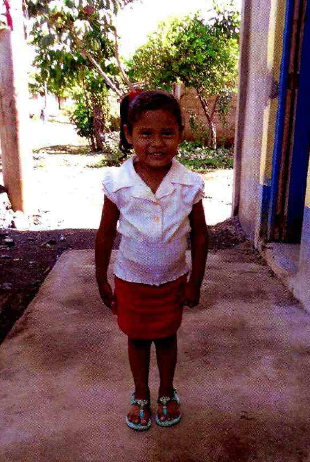 Cislo & Thomas LLP has the privilege of working with Compassion International to sponsor Jeffry Isaac Rodriguez Perez and Genesis Yusneyli Gonzalez Martinez, who live in Nicaragua and support them and learn about their lives through exchanging letter. Cislo & Thomas LLP strongly believes in giving back and are excited for this opportunity to do so! Some of us plan to go to Nicaragua one year from now to see how Jeffry and Genesis are doing.