What used to be considered as only a number sign, the hashtag (“#”) has new life as it has become one of the mascots of modern society.  Now even making its way into the courtrooms, a hashtag issue arose in a Motion to Enforce Settlement Agreement (SA) of Eksouzian v. Albanese that settled, and plaintiffs alleged that the defendants violated several provisions of the agreement. Eksouzian v. Albanese, Case No. 2:13-cv-00728-PSG-MAN (C.D. Cal.).

Both parties make and sell compact vaporizer pens and under the July 2014 settlement agreement, and both parties were to restrict their use of the term “cloud.” The Defendants, who owned the trademark “CLOUD PENS” and “CLOUD PENZ,” may only use “cloud” as part of a unitary mark (for example, “CLOUD PENZ” and “CLOUD PEN”) and Plaintiffs may not use a unitary mark that places “cloud “ next to any of several terms (“PEN,” “PENZ,” “FUEL,” and “PAD”). A unitary mark is a mark that is so merged together that the elements cannot be divided to be regarded as separate elements.

Among other allegations, Defendants claimed that Plaintiffs violated their obligation by using the hashtags #cloudpen and #cloudpenz on social media, which allegedly was not avoiding unitary marks that pair “cloud” with “pen” or “penz” as they had agreed.  Some of the acts involved hashtagging images on Instagram and requiring individuals interested in entering a sweepstakes to use those hashtags in their own posts, as shown below. 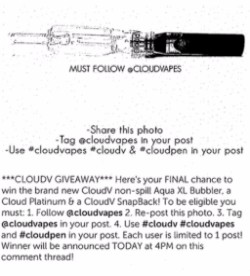 The Eksouzian court held that because hashtags are “merely descriptive devices, not trademarks, unitary or otherwise” and  “merely a functional tool,” the Plaintiffs did not breach the settlement agreement when they used #cloudpen or #cloudpenz as hashtags.

By stating that “hashtags are merely descriptive devices, not trademarks,” the court is calling hashtags essentially incapable of serving as source-indicators.  However, that broad assertion is inconsistent with USPTO practice. Over 70 hashtags have been granted federal registration so far this year, with hundreds of others pending or published.  Some registered marks include KFC’s #HowDoYouKFC and Volvo’s #SwedeSpeak.

It seems that the Eksouzian court declined the opportunity to really analyze the protectability and enforceability of a hashtagged word or phrase.  Hopefully, other courts will bring light to whether and when hashtags function as trademarks.